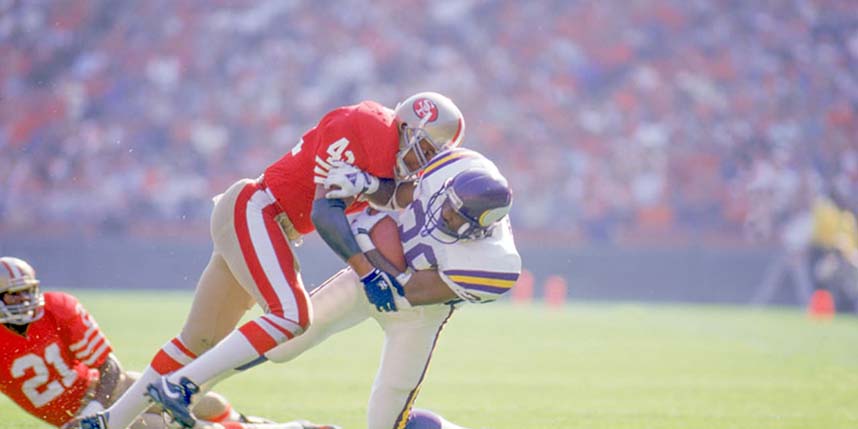 Ronnie Lott, the Hall of Fame defensive back for the San Francisco 49ers and the University of Southern California, will sponsor APGA Tour standout Michael Herrera going forward in a gesture of support for a new friend and for the APGA Tour’s mission of driving greater diversity in the sport of golf.

Herrera, who won one event earlier this year in APGA Tour competition, is a pro golfer with dreams of making the PGA Tour. In pursuit of that aspiration, Herrera plays the APGA Tour schedule and major regional tournaments while pursuing qualifying opportunities with other tours in professional golf. Lott will cover travel and competition-related expenses as Herrera works to advance his career.

The opportunity for Herrera came about in August at the Eighth Annual Cedric “The Entertainer” Celebrity Golf Classic Presented by Lexus at which Herrera was one of the participating pros. He met Lott on the second tee at Spanish Hills Country Club in Camarillo, California, and they had extra time to connect while Lott’s group waited to play the next hole.  In those few minutes, they forged a bond that will now give Herrera his best chance of succeeding in the sport he loves.

Lott is the owner ofTracy Toyota, a prominent auto dealership 60 miles east of San Francisco. Herrera will wear Tracy Toyota logo identification on his attire while competing during the course of the sponsorship.

“He was real interested in my story and he sees that I have the work ethic needed to give making the PGA TOUR my best shot,” said Herrera, who won the APGA Tour Crossings at Carlsbad season opener in January. “Ronnie Lott cares about diversity and he is interested in the success of the APGA Tour.  We also have our friend, Cedric “The Entertainer,” in common. I am fortunate to have met him.”

The Cedric “The Entertainer” Foundation provides college scholarships and outreach programs to enhance the lives of inner-city youth and their families in Cedric’s hometown of St. Louis, Missouri. The foundation has awarded over 200 scholarships and countless incentives through his foundation.

“When I was a rookie, guys like Deacon Jones and Jim Brown and others helped me grow. We need to always find ways to help athletes be their best,” stated Lott in reference to two of the NFL’s all-time great Hall of Famers. “We salute Michael for his efforts and the APGA Tour for creating a championship atmosphere.”

Lott is a renowned philanthropist whose All Stars Helping Kids non-profit has raised $20 million for disadvantaged youth.  A native of Rialto, California, Lott is a member of both the Pro Football Hall of Fame and the National Football Foundation College Hall of Fame.

Lott joins a group of PGA Tour players and several new sponsors who have been supporting the APGA Tour and its players over the past year.  Sacramento native Cameron Champ and his Cameron Champ Foundation are working with the APGA Tour on fundraising opportunities in conjunction with their shared mission of providing greater inclusion in the sport of golf for youth from underserved communities.  Other prominent corporate supporters include Mastercard, which sponsors the annual Mastercard APGA Tour Championship event, and World Wide Technology, which funds the APGA Tour Player Development Program.