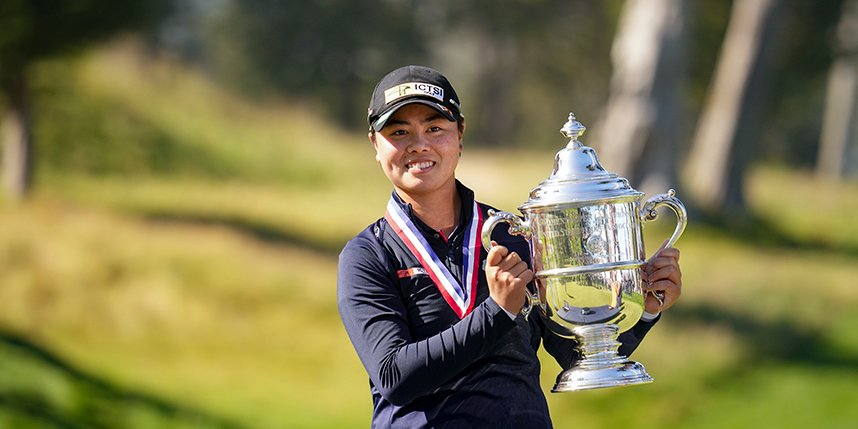 Olympic’s list of past victims includes Ben Hogan, Arnold Palmer, Tom Watson, Jim Furyk and Payne Stewart, and Lexi Thompson can now be added to the remarkable list of players who have come up short in championship bids here.

Thompson, the 54-hole leader, was five strokes ahead of her closest pursuers on a beautiful early June Sunday with 10 holes remaining, only to play the final eight in 5 over par, including consecutive bogeys on Nos. 17 and 18 that left the 26-year-old Floridian with a final-round 75, one agonizing stroke shy of the playoff between Yuka Saso and Nasa Hataoka at 4-under 280.

It took three holes to decide the outcome. Saso converted a 12-foot birdie putt on the first sudden-death playoff hole (No. 9) after both players made back-to-back pars in the two-hole aggregate playoff. At 19 years, 11 months, 17 days old, Saso joined World Golf Hall of Fame member and seven-time major winner Inbee Park as the youngest champion in U.S. Women’s Open history – to the day. She also becomes the first player from the Philippines to engrave her name on the Harton S. Semple Trophy. Princess Mary Superal (2014 U.S. Girls’ Junior) is the only other player from the Philippines to claim a USGA title.

Saso, a semifinalist in both the 2016 U.S. Women’s Amateur and 2019 U.S. Girls’ Junior, entered the final round two strokes behind Thompson and quickly became a seeming afterthought with back-to-back double bogeys on Holes 2 and 3. Her front-nine 38 left her five strokes behind Thompson. But Saso never lost focus as Thompson started to crumble. Consecutive birdies on the par-5 16th and 17th holes tied her with Hataoka and Thompson.

Hataoka was even further back of Thompson. When the 22-year-old bogeyed No. 11, she was seven shots back. But she quietly climbed back into contention with consecutive birdies on 13 and 14, and another on 16.

“On the first [major-championship] playoff I had to wait over an hour, so I was kind of excited,” said Hataoka, now 0-4 overall in playoffs, including the 2018 KPMG Women’s PGA Championship. “It got me all excited and uptight. But this one since it was right away, I decided I would just be relaxed, then just keep doing what I’m supposed to be doing, and this was the result.”

Thompson’s coronation in her 15th U.S. Women’s Open start seemed all but assured after she holed out for par on No. 10. But anyone who knows the history of U.S. Opens at Olympic understands that strange things happen on the inward nine.

Unheralded Jack Fleck birdied the 72nd hole in 1955 to tie Hogan, then denied the Texan a record fifth U.S. Open in the ensuing 18-hole playoff. Eleven years later, Arnold Palmer held a five-shot lead over 1959 champion Billy Casper only to lose in an 18-hole playoff. Watson was passed by Scott Simpson late in 1987, Stewart lost out to Lee Janzen in 1998, and Furyk sustained a crucial bogey on the par-5 16th in 2012 that allowed Webb Simpson (no relation to Scott) to register a one-stroke win over Graeme McDowell and Michael Thompson.

At Olympic, expect the unexpected.

Lexi Thompson couldn’t have had a better start to the final round, ripping her second shot to the par-5 first hole to 9 feet to set up an easy two-putt birdie. After a bogey on No. 2, the hardest hole in Round 4, she answered with a perfect right-to-left-running shot from the rough to 2 feet for a tap-in birdie on No. 5. But after five consecutive pars, her troubles began on No. 11 with a double bogey.

That’s when her short game – particularly her putter – significantly cooled. She failed to convert a 16-footer for par on No. 14, then missed an 11-footer for birdie on 16. A poor drive into the left rough on the 441-yard, par-5 17th forced her to lay up, and her subsequent 122-yard approach from the fairway came up short of the green. Not feeling comfortable chipping, Thompson putted from well off the green and lagged to 6 feet. She was tentative with her 6-foot par putt and fell into a tie for the lead for the first time all day.

A perfect drive on 18 left Thompson 108 yards to the flagstick. Again she came up short with her approach, into a front-greenside bunker. Her recovery stopped 11 feet behind the hole and her downhill par putt to get into the playoff came up short.

“That’s what this golf course can do to you,” said Thompson, who was bidding for a second major after the 2014 ANA Inspiration. “And that’s what I’ve said all week. Overall, I’d be the first one to tell you that I hit some bad golf shots [down the stretch] and I deserved it, but it’s golf.”