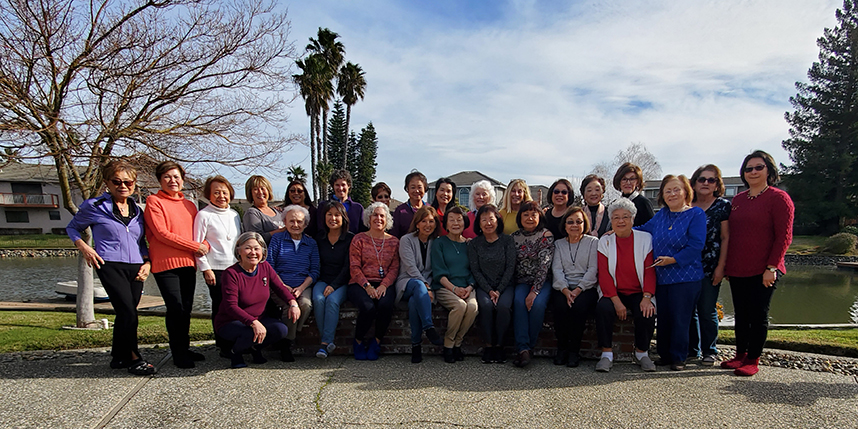 The Sacramento Chinese Golf Club was established in 1952 at the opening of the Bing Maloney Golf Course in Sacramento.  While the Sacramento Chinese GC was a Co-Ed club and women were actively engaged in the events and tournaments, the women decided they’d like to form their own autonomous club.  So, in 1989 they began the process of formalizing the club.  Initially, they had some problems having their club recognized, but with support from Ken Morton Sr. of Haggin Oaks GC, they received their charter and formed the Sacramento Chinese WGC.  Learn more about that here.

Ken continues to be an avid supporter of this club and still receives a special invitation to the Christmas luncheon each year.  The newly formed club joined the Pacific Women’s Golf Association, so members could play and compete with other women throughout the region. The Sacramento Chinese WGC members continue to rack up awards and recognition in Play Days and Tournaments.

Today, the club has 40 members, including seven new arrivals this year.  If you’re wondering too, no you do not have to be Chinese or speak Chinese to belong to the club.  Everyone is welcome, in fact according to Yin-Ping Li the NCGA Ambassador of the club, there are members of many different nationalities in the club.  There are no restrictions on membership and most new members come through word of mouth.   While most of the original members are no longer actively playing with the group, the bonds remain strong, and these women stay connected to one another and some of them continue to enjoy a special social membership in the club.

There are some long standing members in the club, golfers who are getting into their 90’s that are still playing every week.  Yin-Ping speaks very fondly of a long-time member and officer of the club Anna Mae who they lost in 2019.  Anna Mae was not only a club officer, but it sounds like she was also the club cheerleader and team mom.  Yin-Ping tells stories of the annual club meetings where Anna Mae would host the members at her home on Bing Maloney GC and provide a legendary homemade traditional Chinese feast for the guests.  Check out this video of Anna Mae that was produced by the Morton Golf Group.  The club named their Guest Day as Anna Mae Owyang Memorial Guest Day in her honor.  In speaking with some of the members, it seems that good food is a very important element when this group gets together for their club meetings!

The club meets every Friday, and they rotate the courses they play.  Bing Maloney is still their home course, but they also play at Haggin Oaks GC and Bartley Cavanaugh GC.  The members buy into their Points program at the beginning of the year and two of their play days each month are for points and the other two are just for fun!  At the end of the year the points and prizes are awarded to the winners.  While some of the members like to compete in the PWGA Legacy and NCGA events, many are content to play and compete within the club.

Some of the group enjoy golf travel and have made some fun trips to play golf in Hawaii, including a tournament with the Association of International Golf Clubs, whose membership includes Chinese golf clubs in Hawaii, Washington, Oregon, California, British Columbia and Arizona.

The club members not only play golf, but many also volunteer within the greater Sacramento community.  Members help coach high school girls golf at McClatchy HS, and volunteer for the First Tee at Land Park GC.  They also are generous in their donations to the First Tee, the Morton Golf Foundation and some of them have even participated in the 100-hole hike fundraiser for Youth on Course.

Yin-Ping says that the best thing about this club is the camaraderie and the ladies she gets to play with.  During this past year with the Covid restrictions she missed the usual lunch after golf, where a lot of the group bonding and fun took place.  Of course, being able to play golf was a wonderful antidote to Covid life.  Even if you only got to be with three friends at a time – it was so much appreciated.

If you would like more information about this club or inquire about membership, please email the membership chair Shari Pedroncelli at   skirish16@sbcglobal.net