Spirit of the Game: Danielle Kang

This story is from the LPGA Tour

Six-time LPGA Tour winner Danielle Kang recently expressed nothing but gratitude following the second round at the Walmart NW Arkansas Championship presented by P&G. She went bogey-free for the second day in a row, carding a 6-under 66 on Moving Day in Rogers, Ark. and tying her second-lowest round of the 2022 season, which she last shot at the CP Women’s Open. Kang is making just her third LPGA Tour start since June after undergoing treatment for a tumor on her spine and is incredibly proud of her effort, even if there were still a few shots she wasn’t pleased with.

“The journey has been very tough. It's actually unexplainable I think. People around me experience the hardship more, trying to keep me calm and back on track. It's taken a village to get me back out here, and I'm proud to be standing here in front of you knowing that I'm contending tomorrow,” said Kang, who carded rounds of 67 and 65 to sit in a tie for fourth. “Genuinely, I just want to cry, because it's been a crazy journey for me and I know it's going to be not easy moving forward. But even the fact that I got myself in contention, I'm proud, because it's just so hard to wake up so early and I have to do so many things so that I can just play golf." 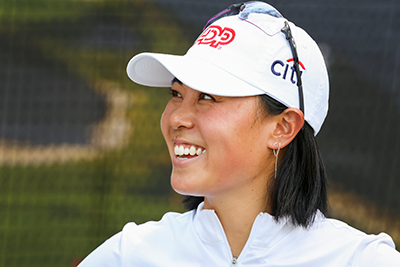 It's was the fifth time this season that Kang has been within five of the lead entering the final round. In those four previous instances, she has one win that came at the Hilton Grand Vacations Tournament of Champions and two additional top 10s, including a solo second at the Gainbridge LPGA at Boca Rio. This is Kang’s 11th time playing the Walmart NW Arkansas Championship and, in her ten previous appearances, she’s had two top-five finishes, a tie for second in 2019 and a tie for fourth in 2021. Considering her history with Pinnacle Country Club and considering she has a renewed hunger to win propelling her forward, Kang is sure to be dangerous on championship Sunday.

“I finished here probably second place, third place, fourth place, seventh place, I don't even know, but I know I've come close many times,” said Kang, who would go on to lose in a playoff but won the hearts of many. “I just really want to win here. I've given myself enough opportunities, and I'm happy that I have an opportunity tomorrow. So just go out there and give it everything I've got. My host family really wants a trophy.”