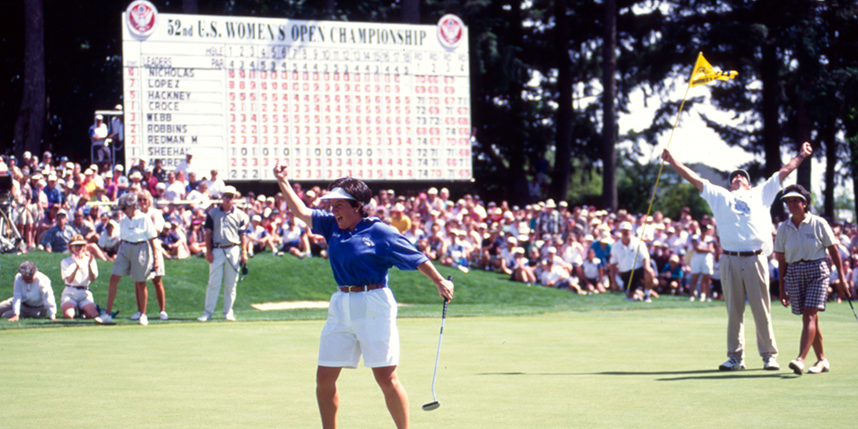 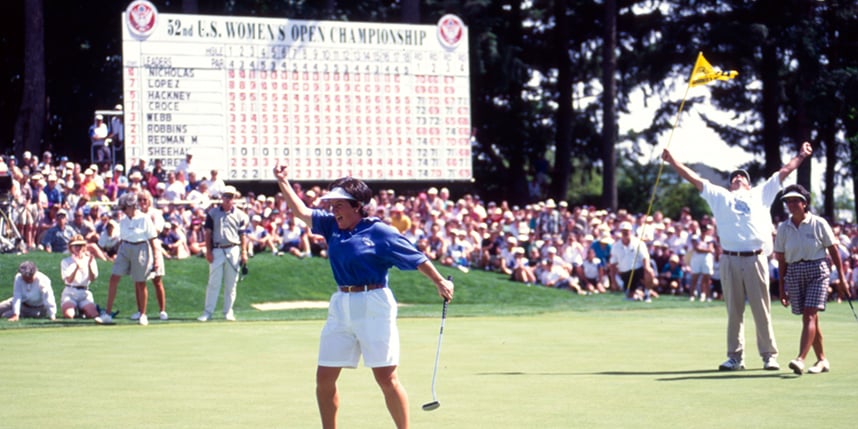 Nancy Lopez, who grew up in Roswell, New Mexico, began playing golf at the age of eight, with her father, Domingo Lopez, an avid golfer, as her coach.

Four years later, when she was 12, she won the New Mexico Women’s Amateur tournament. Lopez later told Richard Lemon in People Weekly, “I was so scared I always threw up. I carried a trash can with me. My dad told me, ‘If you’re going to play golf, you’ve got to get over being sick.’ I didn’t want to quit, so I decided to get over it.”

Lopez also faced other obstacles to her progress. Because her family was of Mexican descent, her parents were not allowed to join the Roswell Country Club and she had to play in Albuquerque, 200 miles away. A writer for Latino Sports Legends commented that her intense competitive drive and “the fact that she was a Mexican-American winning so many tournaments did not sit well with others, but that didn’t discourage her.”

It sure didn’t. In 1972 and 1974 Lopez won the USGA Junior Girls Championship. In 1975, she won the Western Junior three times, as well as the Mexican Amateur. Her high school did not have a girls’ golf team, so she played on the boys’ team and helped them win two state championships.

She’d attend the University of Tulsa for two years in 1976 and 1977; during her time there, she won the Association of Intercollegiate Athletics for Women National Championship and was a member of the U.S. Curtis Cup and World Amateur teams. In 1976 she was named All-American and also won the university’s Female Athlete of the Year award. After two years at the university, Lopez decided to leave to pursue a professional golf career. Although her career was an instant success, her mother died from a heart attack before ever seeing Lopez win a professional tournament. Lopez’s father encouraged her to continue playing despite this tragedy.

Suffice to say, her splash was immense, though her waves continue to roll throughout the golfing industry.

Of course with nine wins that first year she won “Rookie of the Year”. But did you know she also won that year’s money title, the Vare Trophy (for lowest scoring average) and Player of the Year honors?

No one other than Lopez has ever done that.

With 48 career titles including three majors, four “Player of the Year” awards and three Vare trophies it is no wonder Lopez was inducted into the World Golf Hall of Fame in 1987.

The only thing that “Wonder Nancy” could not do was win a U.S. Women’s Open. She finished second four times—twice before that amazing rookie year.

The following year, she won nine tournaments – including a record-setting five in a row.  Including three LPGA Championships, she has won 48 official tournaments on the LPGA Tour.  Lopez has won nine LPGA Awards, including Rookie of the Year, Player of the Year four times, the Vare Trophy three times and the William and Mousie Powell Award.  Other major honors include induction into the LPGA Hall of Fame, the World Golf Hall of Fame, the USGA Bob Jones Award, the William D.  Richardson Award from the GWAA, and the GCSAA Old Tom Morris Award.  She also served as captain for the U.S. Solheim Cup team in 2005.