Lee Elder: A Man of Firsts 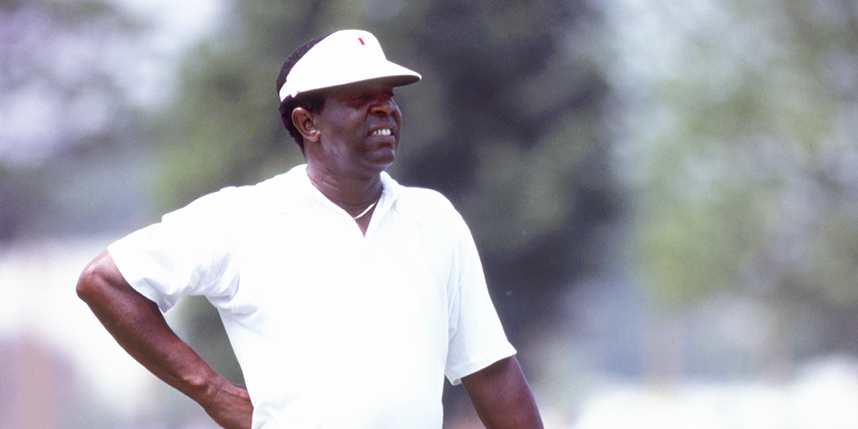 Lee Elder: A Man of Firsts

The USGA contributed to this report

In 2019, during the U.S. Open at Pebble Beach Golf Links, the USGA honored Lee Elder with its highest honor, the Bob Jones Award.

Elder was the first African-American to receive the prestigious award, which recognizes an individual who demonstrates the spirit, personal character and respect for the game exhibited by Jones, winner of nine USGA championships.

“Lee’s perseverance, positive attitude, and generous spirit personify the ideals that the Bob Jones Award represents,” said Mike Davis, USGA CEO at the time. “His grace and humility demonstrate his extraordinary character, and his work at the community level has paved the way for generations of future golfers. We are thrilled to have the opportunity to honor his incredible sportsmanship in the game.”

After bursting onto the PGA Tour in 1968 by tying Jack Nicklaus and extending him to a five-hole playoff at the American Golf Classic, Robert Lee Elder used his new-found fame to introduce disadvantaged youths to the game through various development programs.

Most notably, Elder managed the desegregated Langston Golf Course in Washington, D.C., where he hosted after-school programs aimed at educating youngsters about the game, while also giving them a safe place to spend their afternoons. In 1974, Elder created the Lee Elder Scholarship Fund, which offers financial aid to low-income young men and women to attend college.

Born the youngest of 10 children in Dallas in 1934, Robert Lee Elder was orphaned at age 9 after his father was killed in action during World War II and his mother, overcome with grief, died three months later. Their deaths forced Elder to interrupt his schooling, and he found work at a nearby golf course, sparking his interest in and cultivating his love for the game. He began practicing in his off hours with a borrowed club and developed his skills further after he began to caddie. At age 12, Elder was sent to live with an aunt in Los Angeles, where his affinity for the game grew through jobs in pro shops and locker rooms, in addition to continuing his work as a caddie.

Elder’s competitive career began in 1950 at an amateur event conducted by the United Golf Association (UGA), which provided competitive opportunities for African American players. After a stint traveling with famous golf hustler Titanic Thompson and two years in the Army, Elder played professionally, quickly establishing himself as the top player on the UGA circuit with wins in 18 of 22 tournaments in 1966. He easily qualified for the PGA Tour in 1967 and went on to finish his career with four PGA Tour wins and eight PGA Tour Champions wins.

Elder stared down discrimination throughout his career, most notably by accepting Gary Player’s invitation to play in the South African PGA Championship in 1971, in the hope that a desegregated event would help end apartheid policies in South Africa. Elder also declined an invitation to the Masters that was based on growing legislative pressure rather than his own merit, and instead earned his spot with his first PGA Tour win at the Monsanto Open in 1974.

At this year’s Masters, Elder will return to Augusta National. He’ll serve as an honorary starter along with Nicklaus and Player.

“It was heartwarming,” Elder said in an interview with ESPN’s Tom Rinaldi. “It was a special moment for me. … This will allow me to be a part of something much more than just hitting a ball off the first tee. This means the world to me.”