Faces of the NCGA: Yealimi Noh 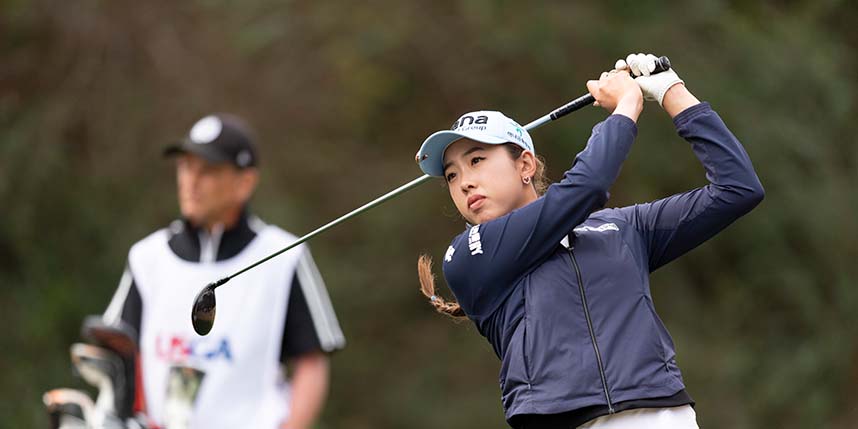 Faces of the NCGA: Yealimi Noh

NCGA correspondent Barry Salberg recently caught up with Concord native Yealimi Noh, who in addition to a highly successful, busy 2021 season on the LPGA (including a triumphant 2-1-0 showing at the Solheim Cup), just relocated with her family to Dallas.

It happened literally a month or so ago, I didn’t even get to go back home and do anything, I just went straight from the European swing to my new home.

Oh, for sure, I love the Bay Area and always want to go back home.

Your thoughts on the wild crowd reaction to your introduction at the Solheim Cup on the first tee?

Oh yeah, yeah, it was incredible, there’s nothing like it. I heard so many things about the Solheim Cup and the first tee and what everyone goes through, but actually it was such a great experience.  The first day I was a little nervous, but as the day went on, I got more comfortable with the crowds being there and it was surreal.  It’s such an incredible thing to be a part of it, it was great!

The people were going crazy, what was that like for you?

They were, it was crazy, it just shows how much pride Americans have for our country and rooting us on.  It was so exciting compared to a regular tournament, when I teed off, everyone thought as rookies we’d prefer it being quiet, but all the rookies felt: keep going, keep going, we can handle it. And it was so much better to have the crowds keep on while we were hitting — it was awesome.

Did you know Pat Hurst from before?

Yeah, I did, she’s from Danville, so we’ve played a couple of times and my coach knows her really well. Just being from the Bay Area brings us together.

What about the pods?

It was really nice, because we all had a pod leader, and mine was Michelle Wie West. I was delighted that she was our pod mom, it was a chance to get know her and the other girls better. Overall, it was a great time with them, just getting to know everyone better outside of golf. The pods were a better way to organize practice rounds and things, with 12 of us, it could be confusing —who’s gonna play with whom, who’s gonna do what, so it was good to be organized within the team.  There were three groups of four, like a smaller team within the whole team.

The captain’s pick to go with the hot hand versus a more experienced player proved to be correct, as you seem to really rise to the forefront these last few months.

I definitely think Pat chose me because of my results, not because she knew me, she wouldn’t do that. I think I deserved that spot, even from the beginning of the year when I was struggling, the Solheim Cup was one of my biggest goals, so I did everything in my power to be on the team and that’s what I did by playing well the last few months. The beginning part of the year including the US Open was very stressful and not the way I envisioned my year starting. And I obviously had a tough time with my game, and struggling — but I kept fighting the whole time, and it was just my time to be kind of be comfortable and let it go and show what my game was really like, and thankfully I did play well. It was just me finally getting my time to shine because it was in there the whole time.

What’s the latest on the driver’s license?

I am still practicing currently every day a lit bit, like 30 minutes, driving around in an empty parking lot.  Hopefully, I will get it by the end of this year.

Do you watch the TV coverage?

My parents always record it, so when I get back home, I get to watch. I told myself I would look as soon as I got back, but I haven’t really had the chance to sit down and watch. Social media makes it easier as they post everything, all the highlights, so it’s easier to watch that.

Tell me about the role of your support team, how important it is to you? Did your folks move with you?

Yeah, we’re always together, they travel with me.  I’ve been with Erik, my coach for so long, he’s like family to me now, he was at the Solheim Cup with me, and it was very special that he was with me for that first time. I’m always thankful that’s he’s in my corner. Being in Dallas it might be more difficult, but even when I was home it was tough because I was always traveling. We text a lot, I send him videos of my swing, there’s not much to it, because he knows it so well. If I’m doing something, he knows what to do. I also have a personal trainer on the road with me, and my parents are always there for support. Carrying-on on the golf side, it’s a lot of work, so it’s really nice to have the extra help. My mom cooks me some good stuff.

Do you have professional help with your social media?

Oh no, I do all my own posting, I have a big interest in photography and enjoy doing it, which is why I love traveling, it’s great to see new places and get some good shots in. I use my iPhone.

Throwing out the first pitch at an A’s game?

That was a long time ago, I don’t watch that many other sports, but I always root for teams from the Bay Area. I’m not a Texan yet.

You’ve excelled in a variety of locales, venues, and types of courses, tell us about your versatility as a strength.

It’s mainly because I keep an open mind about every course and every venue I go to. I don’t like to be like, Oh, I’m not going to play well because I don’t like this grass or I don’t do well with this type of turf. I kind of take it that I can do well anywhere and my game won’t change because of where I am  So, where ever I am, I just play my game and it will be good enough.

Do you have a favorite course?

I do enjoy the West Coast, the Monterey courses — the US Open will be at Pebble Beach in a couple of years, so that’s exciting. I really enjoyed links golf in Europe, that was fun, there’s so many great courses that we play, too many to choose from.

These last few months have been unusual in terms of travel, aren’t you exhausted?

Yeah, I actually am, I’ve never done anything like that before, I wasn’t planning on it, but I played like 11 weeks in a row with only one week off in-between in Europe. It was crazy, very exhausting, mentally and physically, it was a lot to take in, and for much of it I was by myself, which I usually don’t do, but with COVID and everything, I went to Europe for a month by myself. It was lonely at times, but overall, as crazy and exhausting as it was, I’m proud of myself for getting through it. Lots of laundry, and I packed a lot.

Bling on your fingernails?

I have two American flags on my fingernails, and a bunch of stars — you know, red, white, and blue.

Who do you play your practice rounds with; friends on tour?

I’m friends with a lot of the Korean players, they’re all very welcoming. Everyone’s older than me, so they kind of take care of me as a younger sister, so it’s been really nice. And obviously with Solheim, definitely bonded with a lot of players there. Practice rounds I don’t really look at who I’m playing with, but go mainly for time-wise, what fits with my schedule. It doesn’t matter who I’m playing with, I just go and do my own work and get out of there to rest.

Did you follow the LPGA before you were there? Any hero’s or players you admired?

I did watch of course, but I wasn’t obsessed with anyone, I was focused on my game and what I was doing. I followed it, but didn’t have a bunch of favorites or anything.

You were not awestruck when you got there, you knew you belonged?

I think that plays a big part in how I’m able to stay calm and focused, because I don’t get awestruck easily, and even if I do, I don’t show it, or feel it, or let it affect my game.

Anything else you want to say?

You are writing this for the NCGA right?  I love the NCGA, and I’m so thankful for all the things they provided for me when I was a junior golfer, like the JTNC and NCGA amateur events. They played such a big role in my career and I wouldn’t be where I am without them. I hope many juniors in the NorCal area continue to play in these events and enjoy them, and most importantly always enjoy the game even when the competition gets tough. And I’m so always grateful for everyone supporting me back home, I wish I could have gone back and said goodbye, I’m in Dallas now, but hopefully one day I’ll go back and thank everyone in person because there’s so many people to be thanked.  I love the Bay Area and I’m always gonna be a California girl at heart.