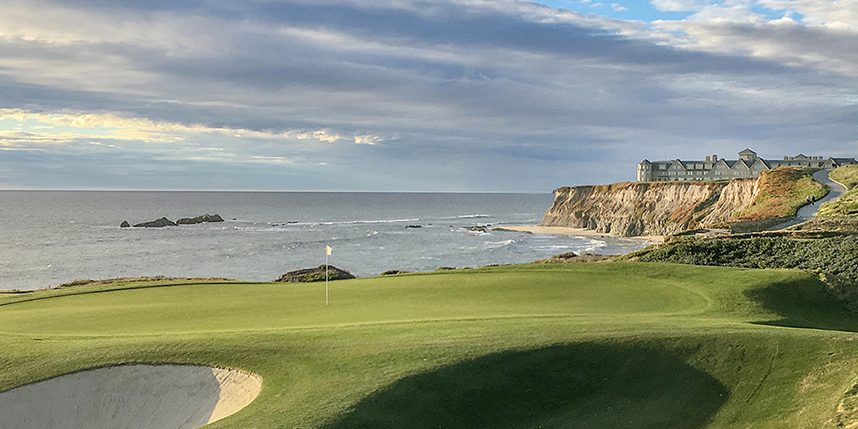 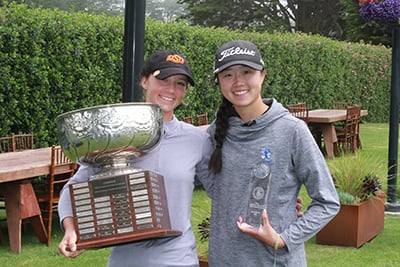 Prior to squaring off in the 18-hole final of the California Junior Girls' State Championship, friends Ellie Bushnell and Sophie Thai spent some time on the practice green at Half Moon Bay Golf Links putting and chatting.

The two for years have been wanting to play as teammates in the U.S. Women's Amateur Four-Ball Championship, but it hasn't happened yet.

"We were again talking about playing together," Bushnell said. "It's something we want to do."

On Friday, they were opponents, with the No.1 seeded Bushnell walking away as the champion following a tough 3 and 2 win amidst the fog-shrouded Ocean Course.

The big difference was a pair of back-to-back wins for Bushnell on the 14th and 15th holes that extended a 1-up lead to 3-up with three play. The two halved the 16th.

"This is one of my biggest wins so far," said Bushnell, a 17-year-old senior at Granite Bay High who will begin playing at Oklahoma State in 2023. "I've wanted to win this for a while."

Thai, a 17--year-old recent high school grad who's headed to Dartmouth, took a 1-up lead on the par-3 3rd when Bushnell made bogey. Bushnell responded, however, by carding three straight birdies on holes Nos. 4-6 to take a 2-up ;ead. That didn't last long either, as Thai made birdie on No.8 and par on No.10 to close the gap back to 1-up.

The No.14 seed, Thai was let down in part by a balky putter. "It was a pretty good match until those last few holes," Thai said. "Ellie played well."

The two met years ago playing together on the junior circuit, including the Junior Tour of Northern California.

For Bushnell, the only thing missing was her coach, who happens to be her father, David.

"He couldn't make it here but it meant a lot to me to win it for him,"  said Bushnell, who was followed by her mom, Shelby. "It makes my mom happy too."

It'll be No.1 seed Ellie Bushnell vs. No. 14 Sophie Thai in the finals of this week's California Junior Girls' State Championship.

Both Bushnell and Thai made it through what was another grueling day on the Ocean Course at Half Moon Bay Golf Links.

Bushnell, a freshman-to-be at Oklahoma State, again was a buzzsaw in her quarterfinals match, winning 5 and 3. But in the afternoon semifinals against No.12 Alaythia Hinds, it was hardly a cakewalk. Having grabbed a 2-up lead through the first 10 holes, Bushnell bogeyed both the 11th and 12th holes to tie the match back up. Another bogey, her third straight, on No.13 and Bushnell was suddenly trailing by a hole.

But she'd respond, making birdie on the par-5 14th to again tie things up. Following a halve on the 15th, Hinds again took a 1-up lead on the 16th when Bushnell again made a bogey. But again Bushnell held firm, winning the 17th with a par and the closing 18th with a birdie to claim a tight 1-up victory.

Thai, who hails from Los Altos, also began her day with a convincing 5 and 3 win. Just like Bushnell, she'd also be tested iin the semis. Playing No.7 seed Michelle Woo, Thai would fall one down when Woo made a birdie on the par-5 10th.

Thai came roaring back, however, carding birdies on the 11th and 12th holes to gain a 1-up advantage. On the ensuing 13th, Thai won with a bogey to increase the lead to 2-up. She'd hold on from there for a 2 and 1 win.

Friday's 18-hole championship match will tee off at 7 a.m.

It didn't take long for the brackets at this week's annual California Junior Girls' State Championship at Half Moon Bay Golf Links to get a bit scrambled.

While No.1 seed Ellie Bushnell and No.4 seed Darla May Dela Torre are still alive, No.2 seed Anika Varma and No.3 seed Sydney Silva weren't so fortunate.

On a day featuring both the Round of 32 and Round of 16, Bushnell escaped an early upset attempt. Facing No.32 seed Ashley Freitas, grabbed a big 4-up lead through 12 holes. But Freitas didn't give up, taking the match to the 17th hole before Bushnell walked away with a 2 and 1 win.

Later in the afternoon, Bushnell, a freshman-to-be at Oklahoma State, got back on track, dispatching No.17 Nikki Chindavong, 5 and 4 thanks in part to a run of nine consecutive pars.

One of the hottest players on the day was Dela Torre, who carded a total of seven birdies over her two victories--both 2 and 1 wins. In her round of 32 match against No.29 Emma Wang, Dela Torre was tied through 13 holes until a birdie. Three straight pars to follow that up closed up the match. In her afternoon match, Dela Torre again found herself all-square through 13 holes. Again, a birdie on the 14th gave her a lead that she would never relinquish.

For Varma, it all ended in the Round of 32 following a tough 20th hole loss to No.31 Lauren Pierce. Pierce was clutch twice, making birdie on the 18th to force extra holes. Pierce also won her Round of 16 match, earning herself a spot in the quarterfinals.

Silva had started strong, opening with a convincing 5 and 4 in the Round of 16. But then the bedevilment that can be match play raised its head. In the afternoon, Silva was defeated by No.14 Sophie Thai, 6 and 5. Thai was on fire in the match, carding an eagle and four birdies over the 13 holes.

Thursday's action will consist of the quarterfinals and semifinals. The 18-hole final will take place Friday. 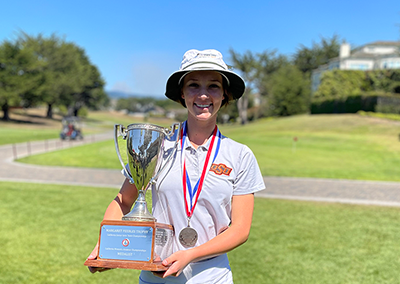 Granite Bay resident Ellie Bushnell will be the No.1 seed when match play gets underway Wednesday at this week's annual California Junior Girls' State Championship at Half Moon Bay Golf Links.

Bushnell, a freshman-to-be at Oklahoma State, was medalist in stroke play qualifying, finishing at 3-under 141 following a second-round 73 on the Ocean Course. Having opened with a 68, Bushnell carded four birdies and five bogeys on Tuesday.

On the opposite side of the bracket will be No. 2 seed Anika Varma of Roseville. Varma came in at 1-under 143 after a second-round 70 that featured three birdies and just one bogey.

Finishing T-3 in stroke play qualifying at 145 and earning the No.3 and No.4 seeds were Sydney Silva and Darla May Dela Torre.

The Round of 32 and Round of 16 will take place Wednesday, followed by the Quarterfinals and Semi-Finals on Thursday. The Finals will tee off on Friday at 7 a.m. 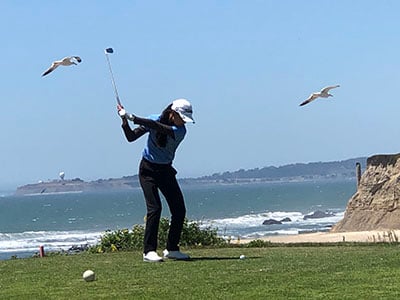 Ellie Bushnell is off to a hot start at this week's annual California Junior Girls' State Championship at Half Moon Bay Golf Links.

Bushnell, of Granite Bay, opened stroke play qualifying with a solid first round score of 4-under 68 on the Ocean Course. She'd card six birdies on her round to go against just two bogeys. On the back-nine, she went 2-under with two birdies and seven pars.

Should Bushnell finish in first place tomorrow, she'll be the No.1 seed for match play.

In second place at 71 is Fairfield resident Darla May Dela Torre. May Dela Torre had seven birdies but also three bogeys and a triple-bogey (par-5 10th).

Following Tuesday's second round of stroke play qualifying, a cut will be made with the low 32 advancing to match play. The Round of 32 and Round of 16 will then take place Wednesday, followed by the Quarterfinals and Semi-Finals on Thursday. The Finals will tee off on Friday at 7 a.m.