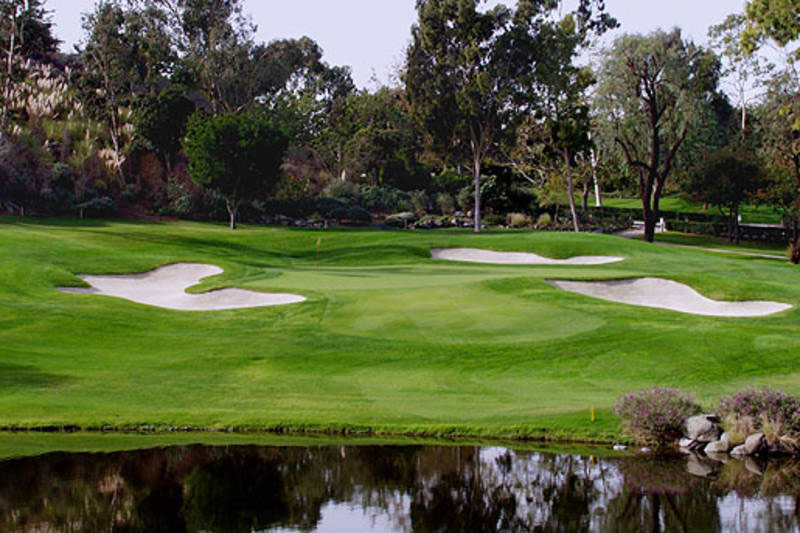 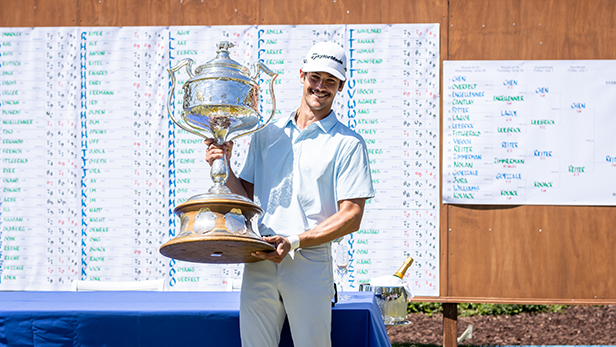 Two years after losing in the finals of the California Amateur Championship, Palm Desert resident Charlie Reiter got to experience the other side, capturing the 111th version of the prestigious event with a 5 and 4 victory over El Dorado Hills resident Kevin Huff.

Reiter also becomes the first previous runner-up to return and win the title since Spencer Levin in 2003-2004.

Having come off a recent appearance at the U.S. Open, Reiter began his week with an upset win over No. 4 Brett Viboch. In the semifinals, he eliminated No.1 seed Kuangyu Chen. His last victim, Huff, was the No.6 seed.

"Finishing second, that wasn't going to happen again," Reiter said. "We got off to a quick start and I kept it going. It was awesome."

A senior at the University of San Diego, Reiter was a buzzsaw in the morning portion of the 36-hole finale. He'd build a commanding 6-up lead thanks in part to a barrage of birdies on holes No.10, 14 and 16 through 18. While Reiter went 4-under on the back-nine, Huff, a fifth-year senior at Fresno State, went 1-over.

Not long after the start of the afternoon portion, Reiter's lead ballooned to 9-up after par wins on holes Nos. 2 and 3 and a birdie win on the par-4 5th. Huff, a fifth-year senior at Fresno State this past season and a member of Team NCGA earlier in the week during the North/South Challenge, did not however fold.

With birdie wins on holes Nos, 9, 11, 12 and 13, Huff slashed into Reiter's big lead. It wasn't enough though. A halve on the 14th and Huff's chances were officially over.

And then there were two.

Saturday's 36-hole final of the annual California Amateur Championship will see No.6 seed Kevin Huff take on No. 20 Charlie Reiter.

On a busy Friday at Big Canyon CC, Huff punched his ticket to the finals thanks to a 3 and 2 win over upstart No. 31 seed Alexander Yang. The No.29 seeded Reiter, meanwhile, moved on after defeating No.1 seed Kuangyu 'Tony' Chen, 1-up.

Huff, a fifth-year senior at Fresno State this past season and a member of Team NCGA earlier in the week during the North/South Challenge, found himself tied with Yang through nine holes. On both holes 10 and 11, he'd finally break through, making consecutive birdies to grab a 2-up lead.

For Reiter, it's his second trip to the finals in three years. In 2020, he lost to eventual champion Joey Vrzich, 3 and 2.

Coming off an appearance at the recent U.S. Open, Reiter, a senior at University of San Diego, found himself in a duel with Chen.

Thanks to a birdie on the par-3 7th, Reiter would take a 1-up lead to the back-nine. Following five straight halves to open the second nine, Reiter got more breathing room, taking a 2-up lead with another birdie on a par-3 (No.15). Chen, who was looking to become just the third foreign-born player to win the event, rebounded with an eagle 3 on the par-5 16th. But both players made pars on No.17 and No.18, ending the match.

In the morning quarterfinals, Huff eliminated 2021 NCGA Amateur champion and No. 30 seed Sam Sommerjauser, 3 and 2. Reiter eliminated No.21 Tyler Kowack, 4 and 3.

No.1 seed Kuangyu Chen is on to another day of action at this week's California Amateur Championship at Big Canyon Country Club.

Chen (pictured, above), who goes by Tony and is a sophomore at Cal-Berkeley, squeaked into Friday's quarterfinals after edging No.16 Marc Engellenner. Engellenner, the winner of last year's Sacramento City, had taken a 1-up lead with a birdie on the par-4 11th. He'd hold that lead over the next four holes until Chen struck back with a clutch birdie on the par-5 16th to tie the match up.

Following a halve on No.17, Chen again came up big, making par on the 18th while Engellenner made bogey. In Friday's quarterfinals, Chen will next face No.9 Casey Leebrick. Leebrick, a senior at Sacramento State, moved on with a 3 and 2 win over Shea Lague.

Sommerhauser, a junior at the University of Arizona and the No.30 seed, won last year's NCGA Amateur at Spyglass Hill. Huff, the No.6 seed and a former player at Fresno State, has yet to trail in a match.

The other two quarterfinals will be SoCal showdowns. No.31 Alexander Yang will play No.23 Joe Neuheisel and No.29 Charlie Reiter will take on No.21 Tyler Kowack. Reiter, one of the biggest hitters in the field, recently competed in the U.S. Open and was runner-up in 2020.

The last No.1 seed to win the event was Geoff Gonzalez in 2009. Chen, who was born in China, would become only the second join Capt. A. Bullock Webster (1924) and Francis Brown (1930) as the only foreign-born players to win the event. Bullock-Webster was born in England, while Brown was born in Hawaii in 1892 before the islands became a state. 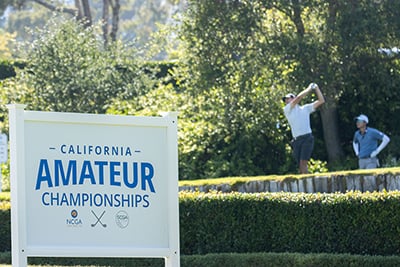 Cal sophomore-to-be Kuangyu Chen got off to a nice start when match play got underway at this week's California Amateur Championship at Big Canyon Country Club.

The No.1 seeded Chen, who goes by the name Tony, opened with a solid 4 and 2 win over No.32 Calder Overfelt. Tied through the first nine, Chen took a 1-up lead with a birdie win on the par-4 10th. He'd go on to win holes Nos. 14 through 16 with birdies to put the match out of reach. Through his 16 holes, Chen went an eye-popping 9-under with an eagle and seven birdies.

Should Chen, who was born in China, win he'd join Capt. A. Bullock Webster (1924) and Francis Brown (1930) as the only foreign-born players to win the event. Bullock-Webster was born in England, while Brown was born in Hawaii in 1892 before the islands became a state.

Each of the three other top seeds fell victim to the beast that can be match play.

No.2 Stephen Hale ran into a buzzsaw in Alexander Yang, who won 6 and 4. No.3 seed Ian Gilligan fell, 4 and 3, to Sam Sommerhauser and No.4 Brett Viboch lost, 4 and 3, to Charlie Reiter. Sommerhauser, a junior at the University of Arizona, is the defending NCGA Amateur champion. Reiter, who spent the last two years competing at the University of San Diego, recently competed in the U.S. Open.

The next highest seed left in the brackets is No.5 Youssef Guezzale, who opened with a convincing 5 and 4 victory.

Chen will next face No.16 Marc Engellenner in a NorCal match-up. Sommerhauser and Casey Leebrick are the only other NorCal players left alive.

Thursday is the Round of 16, followed on Friday by the quarterfinals and semis. The 36-hole final will be on Saturday.

Kuangyu Chen's journey could lead him to the biggest amateur prize in the Golden State.

Chen, who goes by Tony, earned the No.1 seed at this week's California Amateur Championship at Big Canyon CC after carding his second straight 4-under 68 Tuesday to finish stroke play qualifying with a medalist score of 8-under 136.

The sophomore-to-be at Cal-Berkeley was born in Shenzen, China. But he's actually an Australian citizen. While there have been many out-of-state born players to win the Cal Am (inaugural winner Jack Neville was born in Ohio), it is believed that the only foreign-born players to win the event are Capt. A. Bullock Webster in 1924 and Francis Brown (1930). Webster was from England, while Brown was born in Hawaii in 1892 before it became a U.S. state.

There's still a long ways to go, as the event now shifts to a 32-player bracket for match play. But Chen has looked solid. A day after going 4-under, Chen was 5-under through his front-nine---thanks in part to an eagle on the par-5 2nd--before a double-bogey on No.9 left him at 33. On the back, meanwhile, he went on a run that included five birdies in a six-hole stretch (Nos. 11 through 16).

Finishing second, and earning the No.2 seed was Bakersfield resident Stephen Hale. Last year's SCGA Mid-Amateur champ and a Cal alum, Hale came in at 138 after a pair of 69s.

The cut for match play (low 32) came at 1-over 145. Wednesday is the Round of 32, Thursday the Round of 16 and Friday the quarterfinals and semis. The 36-hole final will be on Saturday. 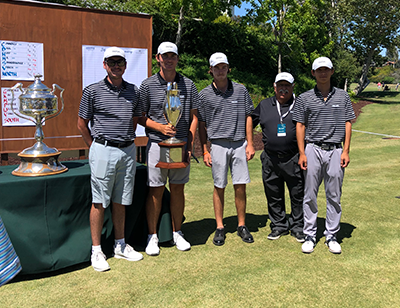 In the North/South Challenge competition, which pits six players from the NCGA vs. six from the SCGA (best-five-out-of-six), the SCGA (pictured, above) cruised to a 706-723 victory to earn the Roger Lapham Trophy.

Luke Potter, a freshman-to-be at Arizona State, got it going in Monday's first round of stroke play qualifying at this week's California Amateur Championship at Bing Canyon CC.

Potter, who became the youngest winner in the 12-year history of the SCGA Amateur when he captured the title in 2020 at the age of 16, opened with a solid 6-under 66 that featured five birdies and an eagle on the par-5 16th. His lone miscue was a bogey on the 17th.

Two players--Jacob Fukano and Dylan McDermott--are tied for second at 67. Fukano won the 2018 Fresno City Amateur. McDermott, also from NorCal, was 2019 Player of the Year on the Junior Tour of Northern California. He'd post seven birdies to go against two bogeys.

Following Tuesday's play a cut will be made with the low 32 advancing to match play. Wednesday is the Round of 32, Thursday the Round of 16 and Friday the quarterfinals and semis. The 36-hole final will be on Saturday.

In the North/South Challenge competition, which pits six players from the NCGA vs. six from the SCGA (best-five-out-of-six), the SCGA leads, 349-367.

On the eve of the championship, Team NCGA got to spend some time with Cal alum and PGA Tour winner Max Homa. 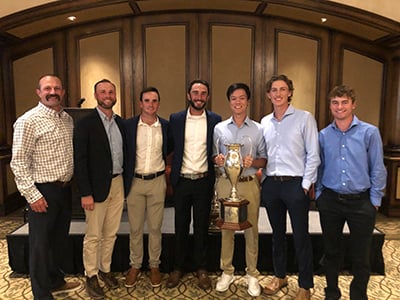 The California Amateur Championship is one of the nation’s oldest state amateur golf championships and dates back to 1912 when the California Golf Association was founded. The California Amateur Championship was originally held at Del Monte GC but shifted to Pebble Beach Golf Links when it was built in 1919. The championship remained at Pebble Beach through 2006, with the exception of 2000 when it was played at Bayonet and Blackhorse GCs due to the U.S. Open being hosted at Pebble Beach. In 2006, the championship began a new tradition of rotating to courses around the state, alternating between Northern California and Southern California. The tournament has seen many top names including Ken Venturi in 1951, Johnny Miller in 1968, Bobby Clampett in 1978/1980, Duffy Waldorf in 1984 and Mark O’Meara in 1979. Standout golfers who have tried to win the title and failed, include Craig Stadler, Corey Pavin, Phil Mickelson and Tiger Woods. Woods reached the semifinals in 1994 before falling to Ed Cuff. The oldest champion remains Vern Callison, who won in 1967 at the age of 47. Mac Hunter is the youngest champion, having won in 1972 at the age of 16.