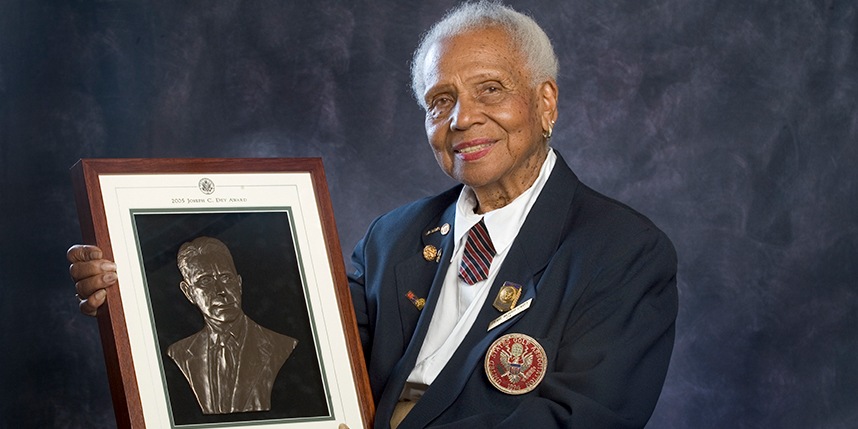 The late Peal Carey was known not only for her dignity and grace, but also her courage.

In 2005, Carey, who passed away in 2009, was chosen as only the second woman to receive the prestigious USGA Joe Dey Award.

Annually given since 1996 in recognition of meritorious service to the game of golf as a volunteer, the award is named in honor of the late Joe Dey, who served as USGA executive director for 35 years, from 1934 to 1969 and was later commissioner of the PGA Tour.

Said Carey upon hearing the news that she was being recognized, “The chairman [of the selection committee] called me a couple of weeks ago and I’ve been sick ever since. I can’t eat, I can’t sleep. Oh my … this is such an exciting thing I can’t believe it. I would have never thought I would get such a thing.”

Carey, who was also honored with the NCGA’s Distinguished Service Award in 2005, had quite a journey.

She grew up in an era when many golf facilities were unavailable to minorities and vowed to help change that in her community. As a member of the Western States Golf Association (WSGA), one of the oldest African-American golf associations, she held numerous positions and championed programs to open the game to minorities.

Among her many contributions to the game, she secured funding from the USGA Foundation to implement the Seaside Junior Golf Program in 1997. She was also former Monterey area director of the Pacific Women’s Golf Association and was the Association’s president in 1994.

In 2003, the PWGA recognized Carey with its Helen Lengfeld Award.

Other awards included the 2002 California Golf Writers Association Golden State Award for lifetime service to the game and especially to junior and women’s golf.

She also served as president of the Monterey Peninsula’s chapter of the NAACP, and was the first black woman elected to the Seaside City Council.

“Ms. Carey was very much ahead of her time in terms of a woman stepping forward,” Mel Mason, who knew her for 53 years, told the Monterey Herald in a 2009 article. “She was the epitome of courage. She was a role model. She was somebody I considered one of my political mentors. She was a very big part of our history here.”